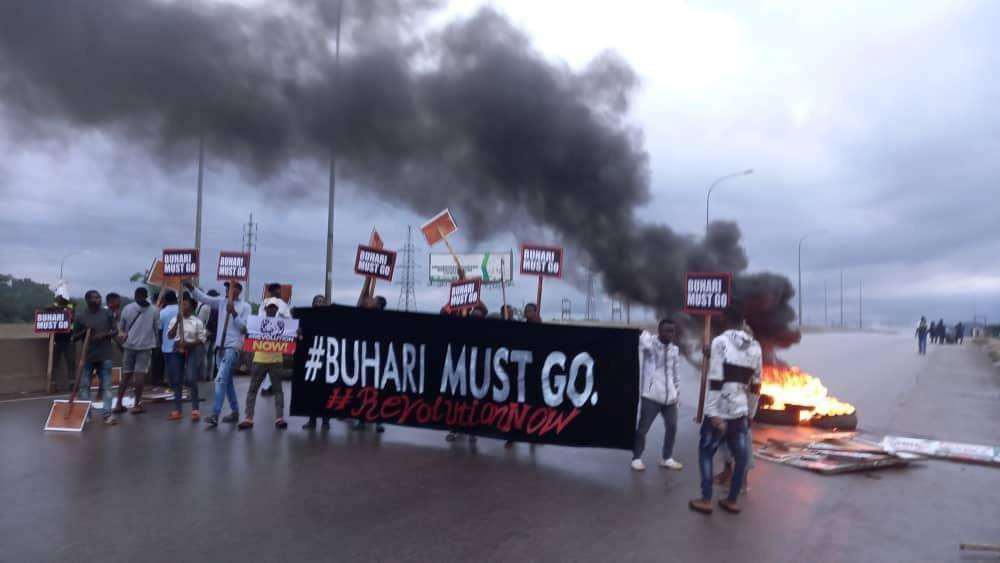 Amidst a dwindling economy and heightened insecurity, the country marks her 61st Independence Day celebration.

Angry Nigerians took to the streets of the nation’s capital city, Abuja, to ask President Muhammadu Buhari to step down from power. Nigeria marks her 61st Independence Day anniversary today, October 1, 2021, but the protesters shunned every form of celebration and trooped to the Dantata Bridge, Airport Road in the early hours of Friday with placards and banners calling for an end to Buhari’s government. The protesters who also set tyres on fire were later dispersed by heavily armed policemen.

Why Nigerians Are Protesting

President Buhari has failed to fulfill his campaign promises such as fixing the country’s economy, power sector, unemployment, poverty, education, health, insecurity, and a lot more. Rather, the country has been hit by series of recession which has seen citizens lament the ever increasing prices of goods and services in the country.

Prior 2015, the country had to deal with the deadly Boko Haram terror group, but the insecurity in Nigeria has escalated to the point of increased banditry and kidnapping on Nigerian high ways and rural areas especially in Northern Nigeria where the president hails from.

Boko Haram is still a major security threat despite Buhari’s promise to bring an end to the group when campaigning for his first term in office. Students at every level of education have been at the receiving end of kidnapping activities in the country as they are easy targets for bandits especially in states like Katsina, Kaduna, Zamfara, and other northern states. Majority of Nigerians who depend on road transport for movement are prone to attacks from kidnappers who demand high ransom from their families.

Buhari since becoming president has put the country into large scale debt and has continued borrowing. Citizens were shocked when the president during the United Nations General Assembly asked for debt cancellation from foreign powers, a big proof that the government has no repayment plans as the country’s economy continues to dwindle. The value of the country’s currency (naira) has continued to depreciate, a huge concern for local and international investors in the country.

The country’s health sector has largely been ignored by the Buhari government as doctors have had to embark on strike action to press their demands. Health facilities in the country are nothing to write home about as the president himself has had to depend on London for his numerous medical trips.

Nigerians in October 2020 protested against police brutality and called for an end to the Special Anti-Robbery Squad (SARS) a notorious unit of the Nigerian Police Force. The protest would metamorphose into a call for change in every sector of the country. The globe would be shocked with the turn of events on October 20, 2020 as peaceful protesters were shot, killed and injured at the Lekki toll gate. Nigerians have not forgotten the actions of October 20.

The failure of the Buhari government is glaring in the eyes of every Nigerian as plans for the 2023 general elections are set to hit a high in 2022. The next government would inherit a lot of problems and would need a lot of patience from already angered Nigerians to fix the country.